The EARTH Gallery of Art is located in historic downtown Goldsboro, NC.

INQUIRE ABOUT OUR LEASING PROGRAM. Monthly rate 10% of painting price. Minimums apply. Lease to own in 10 months

Lotus Blossom paints large scale acrylics, that reflect her interior and environmental design background in color and design quality and her painting education in technique. Lotus is an Honorary member of N.C. Tuscarora Indian Tribe.

Watercolorist Dreamweaver is a certified American Indian tribal member and considered one of the premiere North Carolina Indian painters. His spiritualism and love of the Woodland Indian culture are portrayed in his abstract expressionist images and series of portraits. Dreamweaver is a member of N.C. Haliwa-Saponi Indian Tribe. 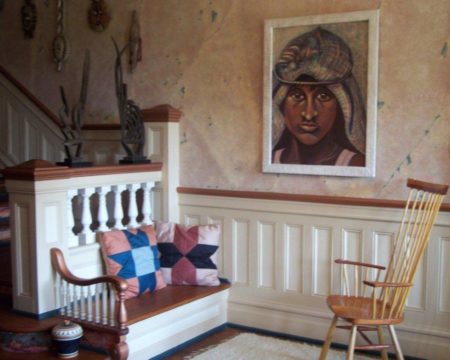 BIOGRAPHY – Joanne Lesak, after earning a BFA in Interior Design from Maryville University, St. Louis, Mo. in 1975, opened Joanne Lesak Designs in Durham, N. C., where she practiced until 1988. In 1990 she earned a MFA degree, majoring in Environmental Design and minoring in Painting and Art History, from East Carolina University, Greenville, N. C. She spent the following five years painting full-time at Lake Gaston, N. C. Prolific work was sold through representatives to designers and galleries throughout America. Much of the work was commissioned by designers to complement a particular room scheme. Her interior design background lent itself to the ability to create a piece using a previous composition in new colors to work with the fabric designs and colors of a specific color board. Her love of textiles is often reflected in her work. 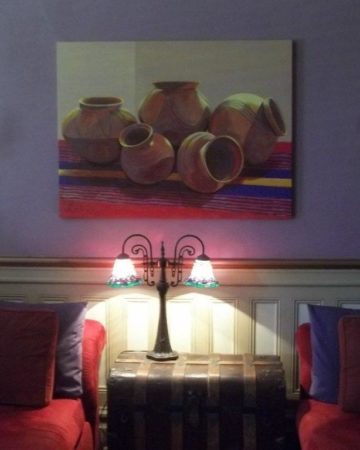 After moving to Goldsboro, N. C. the beautiful historic homes beckoned to be restored. During the next 18 years Joanne Lesak partnered with Dreamweaver to restore homes and practiced architectural design. It proved to be a venture that left little time for painting and, unfortunately, required the easel be set aside for much longer than originally anticipated. During that time she opened a Bed & Breakfast and partnered with Dreamweaver to add a fine arts gallery and open an organic market place and community gardens. The North Carolina Tuscaroran Indians honored her with the Indian name Lotus Blossom for her work promoting Woodland Indian Art. In 2013, when she began painting again, Joanne Lesak signed her work Lotus to signify her rebirth in painting. The first series of 6 was “Pottery”. The 2014 “How Do You Measure?” series consists of 8 works. ” Choose Your Colors! used the 2014 series as inspiration by enlarging portions from each piece.  The 2015 compositions may be painted in a client’s color scheme. The portrait series was completed in 2016 and the Blue Ridge Parkway landscape series in 2017. 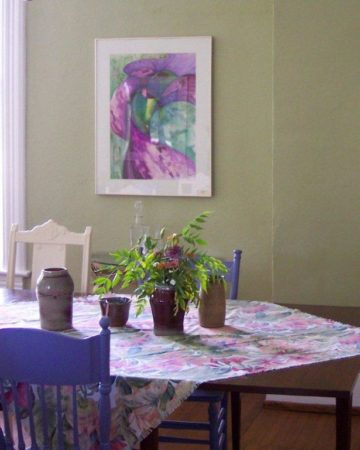 BIOGRAPHY – Dreamweaver had a diverse past that took him throughout the United States working as an electronic engineer after serving in the Navy during the Vietnam war. He studied art at Western Michigan University, Kalamazoo, Michigan and Lake Michigan Community College, studied glass blowing, and researched the Mayan culture throughout Mexico. He designed and built parade floats in Santa Ana and Pasadena California and was Art Director for the City of Santa Ana. After returning to N. C. he restored historic homes and founded the non-profit Grandpa’s Children, Inc. Under the non-profit he trained “at risk” youth in museum quality restoration; was founding director of Plum Tree Market Place and Community Gardens, which offered free vendor space to Wayne County residents to sell organic produce, fine arts and crafts, and home produced items; taught food production students from Wayne School of Engineering and other Wayne County residents in the community gardens; built a greenhouse to save heritage seeds; and presented an American Indian festival each November for Native American Month.

Dreamweaver’s painting approach reveals the deep inner spirituality of an American Indian, rather than projects surface reality. The portrayal is not only of the ethnicity inherent in Indian art, but also the intuitive aspect, which shows forms from nature in an explosion of color, feeling, and movement. The technique is unique in that it incorporates layer upon layer of color. The initial series “Blue & the Ladies” is seven portraits beginning with a young girl Blue, the blossom just waiting to burst. Her mentors, six educated, powerful women from diverse races and backgrounds, each represent a decade of life through the seventies. The number seven is symbolic to Indians and each portrait reveals the use of one of the colors used in the four directions or the three levels of life. The portrait collection has grown to include Aunt Nancy in her late 80s; and commissions of Nicol, a Mayan Indian princess, whose grandfather was the last medicine man – “chaman”, of her tribe in Mexico; the N. C. Tuscaroran Indian Tribe Chief Hunt; Eudora, Chief Hunt’s daughter and Lotus Blossom’s granddaughter, “Ariel”